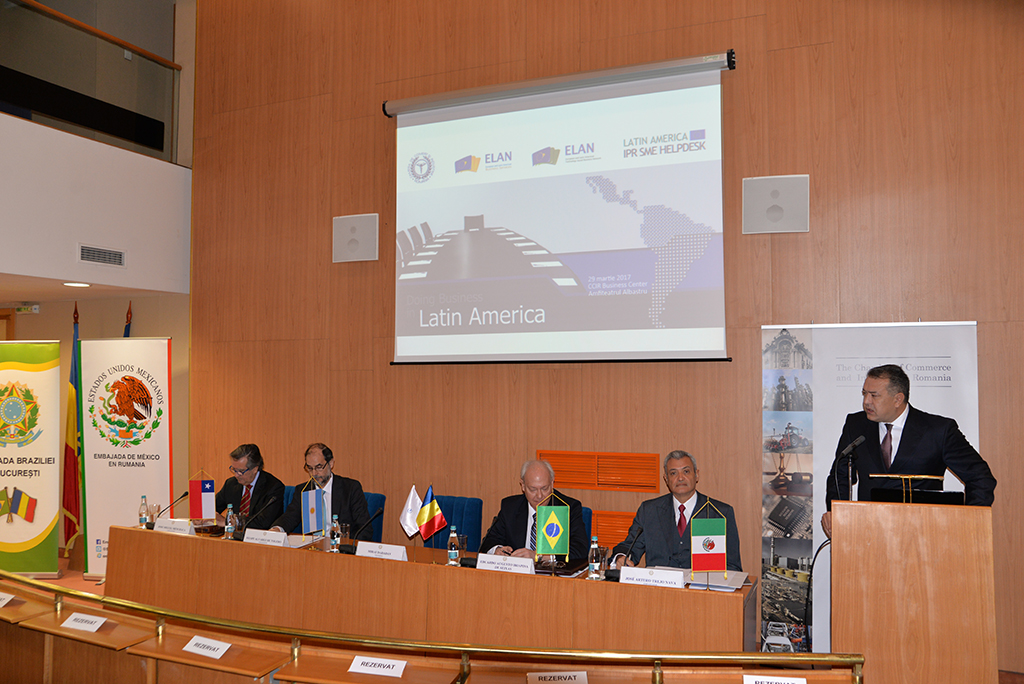 Bucharest, March 29th: The Chamber of Commerce and Industry of Romania, together with ELANBiz program (European and Latin American Business Services) held on Wednesday, March 29th, 2017, at CCIR Business Center, a seminar meant to know more about Latin American markets.

During the seminar, ELANBiz representative, Mr. Javier Sanchez presented the challenges that the companies from EU countries facing market access in Latin America. Regulatory frameworks, complex bureaucracy, certificates and approvals especially lack of economic diplomacy representatives from all EU Member States in the area of Latin America are issues that can be overcome. Raising awareness of conditions in that market access can be improved for EU businesses through accurate information and constantly updated.

The President of CCIR, Mr. Mihai Daraban said in his opening remarks: “We are very pleased to organize this kind of meeting because the Chamber of Commerce, as the main organization in supporting business environment, has counterpart in more than 40,000 locations around the world. I can say that after Romania’s accession in EU, 70% of our foreign trade is conducted with the Member States, 15% with European countries not yet part of the EU and remain, unfortunately, only 15 percent with the rest of the world. Here we have present four countries with which Romania has economic exchanges quite low: 460 million Euro with Brazil, 280 million Euro with Mexico, 90 million Euro with Argentina and about 30 million Euros with Chile. But I can tell you that if one visits your countries, he will be able to find many goods manufactured in Romania, which are not registered in the trade between our countries. We have a global economy and, in many cases, Romania’s exports are in the hands of foreign companies. Of the top 100 export companies in Romania, only four companies have Romanian capital and this is the explanation for not founding Romanian goods and products directly in your countries”.

HE the Ambassador of Argentina, Mr. Felipe Alvarez de Toledo said at the event: “It is a first step towards promoting the business environment in Latin America and Romania. Although, I have been leaving here in Romania, since October last year, I realized that there are many things that can be done in Latin America, especially Argentina, and Romania. If we look at the last 5-10 years, statistics on trade between Romania and Argentina are not remarkable. (…) One reason is the long period of time needed for the goods to arrive in Constanța Port and, this is an important factor in supporting and developing a business. We should mention that our internal problems are an important factor as well. However, we have to deal with these issues and take suitable measures to correct these tendencies and I pledge that I will work with representatives of Chambers of Commerce to enhance trade with Romania”.

HE the Ambassador of Brazil in Romania, Mr. Eduardo Augusto Ibiapina of Seixas reminded the missed business opportunities between Romania and Brazil: “In 2015, bilateral trade reached 480 million USD. Although this figure represents almost 42% of Romania’s exports to Latin America, it shows only 0.15% of the trade of Brazil. (…). A country with 200 million inhabitants is a country with a large consumer market. You have the expertise, the product competitiveness and the services to be part of this market. Here CCIR steps in and today’s seminar is the first step in this direction. (…) I encourage and invite the CCIR to come to Brazil to discuss new business opportunities for business circles of the two countries and to expose business advantages of Constanța Port for Brazil”.

HE the Ambassador of Chile in Romania, Mr. Jose Miguel Menchaca said that this seminar “is a great opportunity for us to come together to discuss cooperation and investment opportunities. (…) It is also a good opportunity to confirm the friendship between Chile and Romania. (…) Last year we celebrated 90 years of diplomatic relations between Chile and Romania (…) and we are sure that this initiative today will provide a boost in the commercial bilateral relations”.

H.E. the Ambassador of Mexico, Mr. José Arturo Trejo Nava, said: “Latin America plays an important role in the global economy, are countries that have passed through a process of modernization after a period when they were somewhat closed, until recently. Mexico is a country that has begun to open up in the 90’s and currently has 46 trade agreements. Mexico’s economy, in terms of exports, goes on profits (…) Mexico’s annual export a turnover of approximately 360 billion”.

The potentially competitive economic sectors relevant to the development of partnerships with countries of Latin America are: ICT, pharmaceuticals, automotive components, wood and furniture, tourism and ecotourism. 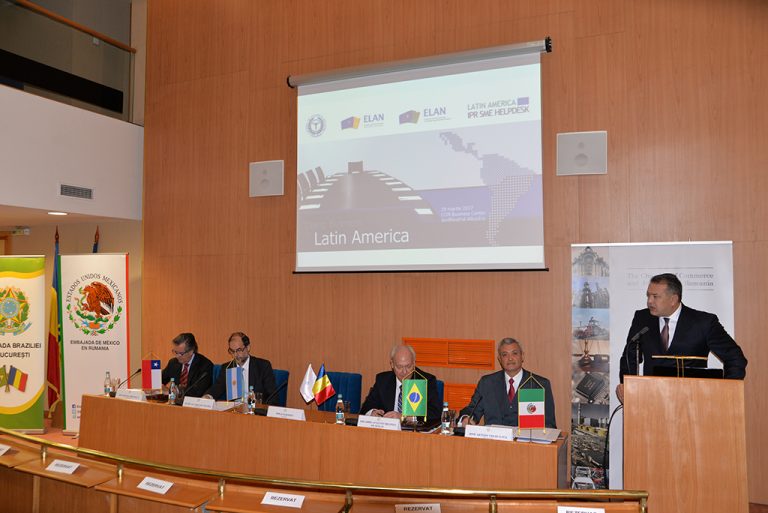